Facing criticism from exporters and domestic industry over the decision to axe the Merchandise Export from India Scheme (MEIS) scheme, the commerce department has now told the revenue department that some broad benefits should be continued under MEIS’s proposed successor.

Senior sources say the ministry has repeatedly pushed back against the decision to cap the MEIS at Rs 9,000 crore for the April-December period and the unilateral suspension of disbursal of benefits. Officials say, the commerce department has now suggested that benefits under the proposed Remission of Duties or Taxes on Export Products (RoDTEP) scheme be expanded to support exporters.

The updated RoDTEP scheme had been announced earlier as an updated alternative of the MEIS, set to go live from January 1, 2021. However, benefits were reduced drastically after the finance department expressed objections. Now, the commerce department has suggested that it follow a formula that is similar to the MEIS.

“While the rates for RoDTEP are being drawn up, it has been suggested that the benefits should now be broad based and cover a larger cross section of manufacturing industry,” said a senior official. However, the argument of cutting down on expenses might fall flat if the initial projected cost of Rs 50,000 crore worth of tax rebates holds true going forward.

Instead of extending the MEIS, which cost Rs 43,500 crore in 2019-20, the finance ministry and the NITI Aayog have called for putting financial resources into new Production-Linked Incentive (PLI) schemes in select sectors with core competency and potential for global exports. Unlike MEIS, RoDTEP aims to support a few identified sectors where the government deems India to have competitive strength and assist companies to enhance their size and scale.

Goverrnment sources say public tax liability under the MEIS ballooned from Rs 20,232 crore in 2015-16 to Rs 43,500 crore in 2019-20, becoming unsustainable. However, exports were stuck at $313 billion in 2019-20, compared with $310 billion in 2014-15. The revenue department argued against continuing the scheme, calling it inefficient and wasteful. It pointed to the runaway cost of maintaining the scheme, despite exports not growing at all. 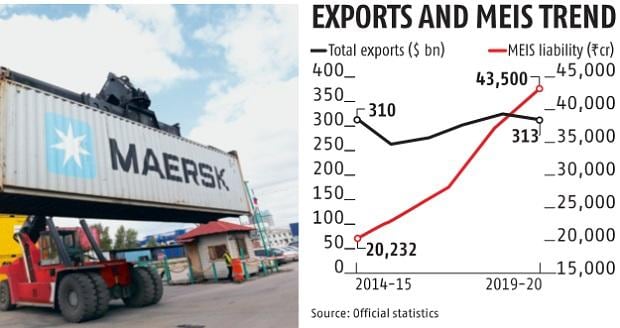 While MEIS was set to be discontinued last year, the commerce department extended it till December 31 this year, in April. However, the Directorate General of Foreign Trade asked the Department of Revenue and CBIC to stop registration of applications for scrips or incentives under MEIS for shipping bills dated April 1, 2020. Incentives of Rs 422 crore were issued to various exporters until July 20. Since July 23, the online MEIS module has been blocked.

Introduced in 2015 under the Foreign Trade Policy, the MEIS was created by merging five reward schemes. Initially, exporters earned duty credits at fixed rates of 2 per cent, 3 per cent, and 5 per cent, depending on the export of certain products to three sets of countries. While it originally covered 4,914 tariff lines, it currently covers 8,059, which constitute 75 per cent of all traded products.

Not everybody is satisfied with this reasoning. The Federation of Indian Export Organisations has said that the sudden axing of the scheme would spell disaster for exporters, who had already factored scheme benefits into their cost outlay for the current financial year.

The CII on Tuesday batted for increasing MEIS rates for all products by 2 per cent, for a period of six months, up to December 31. “India’s working capital cycle is elongated owing to various factors, necessitating higher credit requirements, which add to costs of exports,” it said.