In times of crisis, global solidarity and interconnectedness take many forms – one of them is a large artwork, roughly 12m X 2.5m, painted by Hamburg artist Jeannine Platz on a red 40-ft-Hamburg Süd container.

The container-turned-piece of art will now be travelling around the world for a year and to almost every continent. In this way, Hamburg Süd will be supporting the project of this painter, which aims to set an example of global solidarity and interconnectedness in these difficult times.

“As a result of the coronavirus, almost all borders on this planet are closed for the first time. Intercontinental air traffic has largely come to a standstill. As a result, the sea is again becoming what it once was: the only connection between the continents for people to interact and exchange things,” said Platz.

“This container’s journey will thereby become a symbol of overcoming the closed borders between continents and countries. Despite the budding national isolation seen in many places in this world, the container will be a symbol of global interconnectedness.”

To express this solidarity, she has painted in calligraphy a quotation from a seafarer in large letters on the second exterior wall of the container: “You dip your finger into the sea and you are in touch with the whole world.” It is a statement that everyone in Hamburg can turn into reality on the beach along the Elbe River. 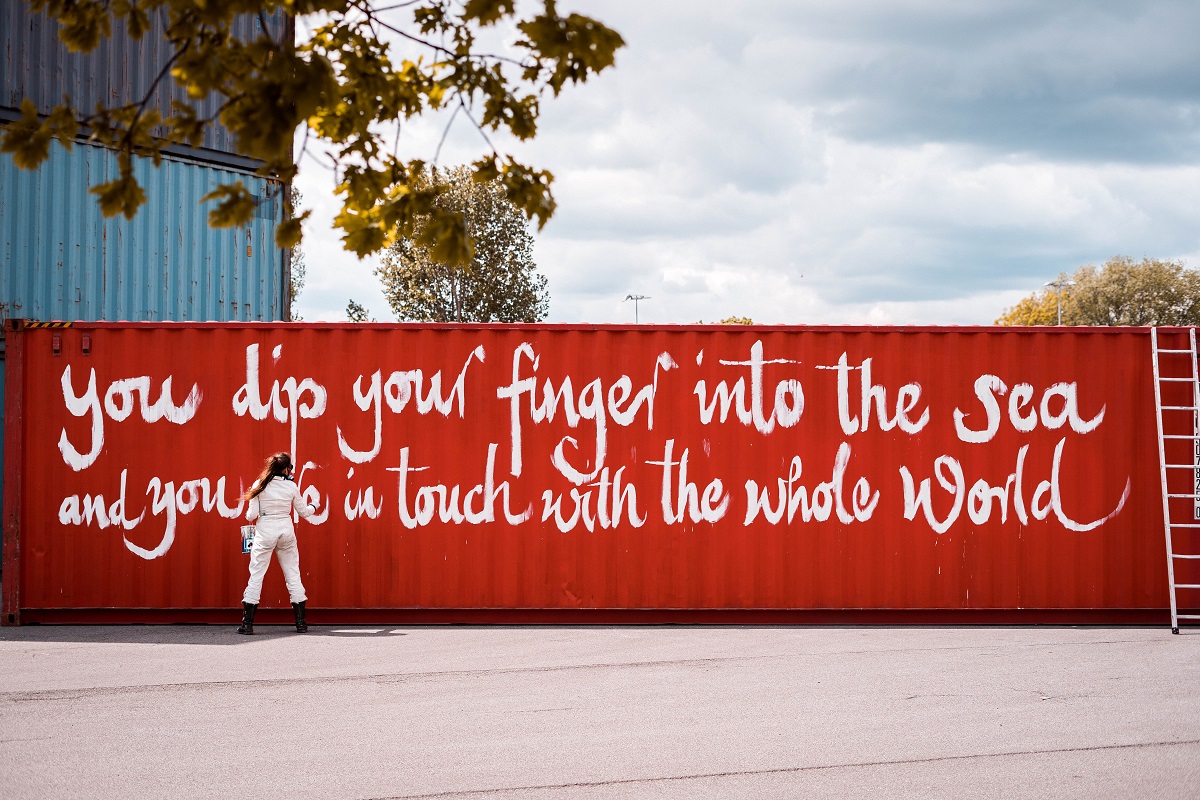 “As a shipping company, we have close ties to all the places this container will be stopping, some of which are as old as Hamburg Süd itself. These ties are with countless business partners, but trade has also always forged close friendships, which are much stronger than what we are currently experiencing in light of the challenges brought about by the coronavirus. For me personally, this art project stands for these global friendships, which many people in Hamburg cultivate thanks to our port, which make our city so cosmopolitan, and which allow us to act with such calm in these difficult times,” said Arnt Vespermann, ceo of Hamburg Süd. “And it goes without saying that we all hope that this profound crisis will be behind us by the time this container returns to Hamburg.

Hamburg Süd will be loading this special container full of goods onto the 9,600-teu Cap San Maleas, which will depart from Hamburg on 25 May, making its first call in the Brazilian port of Santos, on the east coast of South America, before heading back north to the US East Coast.

Then it is scheduled to pass through the Panama Canal and sail to either Peru or Chile, from where the “container greeting” will be shipped from Hamburg via Auckland, New Zealand, to Sydney, Australia, and then on to Asia – always filled with different goods.

In 2021, the container will leave Asia and start its journey home, which will take it through the Suez Canal to Hamburg with a stopover in the Mediterranean. If possible, the container is also supposed to touch the African continent.

In the year of the container’s return, Hamburg Süd will be celebrating its 150th anniversary. As part of the celebrations, the painted container will be exhibited in the city along with details about its journey across the world.