In his fifth address since the Covid-19 outbreak, Prime Minister Narendra Modi on Tuesday evening announced a much-awaited Rs 20-trillion stimulus package while giving away that the nationwide lockdown would be extended beyond May 17.

Lockdown 4.0, however, would be very different from what we have seen so far, the PM said in a primetime telecast. The details of both — the package and the next phase of the lockdown — would be unveiled during the week.

The PM said the Rs 20-trillion package, nearly 10 per cent of India’s gross domestic product (GDP), would be with the objective of putting money into people’s pockets to spur domestic consumption and demand. The package would cater to various sections, including the cottage industry, micro, small and medium enterprises (MSMEs), labourers, and middle class.

The package, expected to cheer the Street, combines the government’s recent announcements on supporting key sectors, as also measures rolled out by the Reserve Bank of India (RBI). In March, Finance Minister Nirmala Sitharaman had announced a package of Rs 1.7 trillion to deal with the corona crisis.

The RBI has also made a number of announcements, including for mutual funds and NBFCs. It lowered interest rates, opened a refinance window and other measures to unclog the credit flow. The impact of these announcements is roughly Rs 4.5 trillion.

Officials involved in discussions on the mega-package said the announcements by the FM starting Wednesday would be two pronged. There would be fiscal measures, which would directly come out of the government’s expenditure and aimed at citizens and beneficiaries.

These could include increasing the quantum and scope of cash handouts to the poorest through direct benefit transfers. The fiscal measures could also include tax benefits for some of the most affected sectors, and benefits for companies, especially MSMEs, to retain employees and maintain workforce. 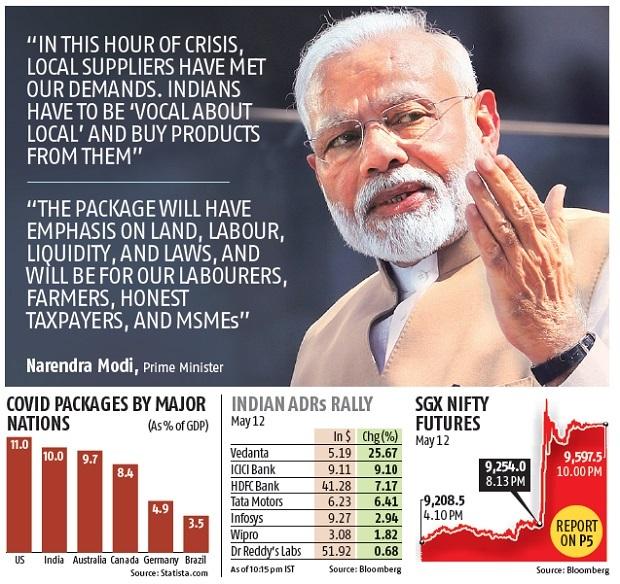 The second aspect could be on the liquidity side including a credit guarantee scheme for working capital loans of MSMEs. There could be steps to provide additional credit for sectors like aviation, services, tourism, logistics, hospitality and others, which have faced the brunt of the lockdown rather hard.

The other significant message in the PM’s latest address was that buying local would be the bedrock of “Aatma Nirbhar Bharat”, or self-reliant India. He appealed to Indians to not just purchase locally manufactured products, but be “vocal” about buying “local”, reiterating the points he had first made during the Independence Day speech in 2019.

The PM said the stimulus package would help the country achieve the objective of self-reliance through five pillars–an economy geared for quantum jumps, not incremental changes; modern infrastructure; technology driven systems and processes; demography; and a strong demand and supply chain.

Stating that Covid-19 could be part of our lives for a long time, Modi asked people to observe precautions but get on with their lives as he hinted at a more relaxed lockdown from May 18 in a move to revive the battered economy.

The PM said ‘lockdown 4.0’ would be different from the earlier three versions, based on suggestions of the states, and the new rules would be made public before May 18. Modi on Monday had asked chief ministers to share their broad strategies on enforcing the next lockdown by May 15.

The PM said Covid-19 was a crisis, but offered the country the opportunity to make 21st century an Indian century by becoming self-reliant, by realizing the dream of ‘Make in India’.

The cumulative size of the stimulus package, plus the announcements made earlier by Sitharaman and the RBI, will be around Rs 20 trillion, or 10 per cent of GDP if one takes the 2019-20 revised nominal gross domestic product estimate of Rs 204 trillion.

For context, the largest Covid-19 stimulus package, as a percentage of GDP, was announced by the United States Federal Reserve. As per data portal Statista, it was pegged at 11 per cent of GDP, that of Australia was at 9.7 per cent, Brazil was at 3.5 per cent.

The earlier thinking in the government was that instead of such mega-packages, the Centre should go for smaller, targeted announcements. This changed because of three factors. First, the increase in borrowing programme for FY21 to Rs 12 trillion, from Rs 7.8 trillion, has given the government more room to spend. Second, the Centre has a better idea of how deep the economic slump is and will be. And third, with the economy gradually being opened up, industries, especially small businesses, will need all the support they can get.

Modi said going ahead an “aatmanirbhar Bharat” is now “the only way”.

To reinforce how India had both the will power as well as ability to accomplish this, Modi said India produced negligible N95 masks and PPE kits when Covid-19 started spreading, but now manufactures 200,000 such masks and kits daily.

He said local manufacturing, local markets and local supply chains proved to be the saviors during the lockdown period, and we need to make “local” our life mantra. He said all the current global brands were also “local” at one point, and Indians can learn from how people abroad took pride pride in them and made them global.

Modi said the definition of ‘self-reliance’ has changed in the world, and people have started discussing about “money-centric globalisation’ versus “human-centric globalization”. He said the world is looking at India with hope since Indian civilizational ethos has always espoused self-reliance, but with the spirit of vasudhaiva kutumbakam, or the world is one family.

The PM stressed the importance of stronger demand-supply chains. He said the need of the hour was to increase demand, and for this each stakeholder of the supply chain will be strengthened. He promised reforms in agricultural supply chain, rational tax systems, better financial systems to attract investments to pave the way for India to be a bigger player in the global supply chain.

“We will wear masks, maintain do gaz doori, but we will not let our aims and aspirations be forgotten,” Modi said.

Adani Logistics to shut down I 28 May 20

Anti-dumping duty likely on ru 28 May 20